After over 5 years of trying and thanks to £27,271 Sport England funding, in 2013 the playing surface of the half-sized MUGA at Brockbeck was extended by 10m; a matching goal end and freestanding pod seat were installed; and laurel bushes were planted around the perimeter fence. 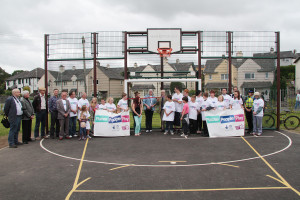 Our thanks must also go to SLDC, NPS and Thomson Hayton Winkley for their support with this project.

The site was named The Brendan Jameson Games Area in recognition of the help and support the late Brendan gave to this project over the years.

But the work didn’t stop there, as the Sport England funding was dependent on us developing sports on the area for at least 3 years.

South Lakes Housing kindly funded the equipment used in the variety of sports run for us by North Country Leisure from 6pm-7pm on Monday evenings every week in all but the Winter months of November to February; and Westmorland FA coaches also run sessions from 2pm-3pm on Thursday afternoons during school holidays.

The Monday evening sports sessions continued until October 2019 when they ceased for the Winter months. However, they did not resume thereafter due firstly to the pandemic and then to our 7-year Lease of the land having come to an end.

The Area is now owned and run by SLDC.